Last night I received a phone call from my neighbour, who was out and about in his car, saying the Northern Lights were spectacular.

So I dashed outside, camera in one hand, tripod (the original tripping hazard) in another and set up.

I took this photo having failed to tighten the tripod screws and cleverly managed to capture, or create, many shooting stars (or was it the camera slowly tilting).

The aurora came and went, nothing huge – I had probably missed them at their best – but, still, it was nice to stand in the freezing cold, waiting for the magic show.

While I stood in the dark with a vague green glow to the north, I decided I would dispel the myth of some of the photos around that the media would have believe, ie that they light up everything in sight to the point of almost daylight.  This just isn’t true.

The next four photos were taken seconds apart.  I want to show you that by changing the settings of the camera, you can create very different impressions of the Aurora.

Normal settings – (the red glow on the right, by the way, is Sullom Voe Oil and Gas Terminal so ignore).

And the same one but with some fiddling about with exposure, whitening, vibrance, saturation, tone and any other button I can find that might make it all the more spectacular.

But, remember, that is not what you see when you stand outside freezing your bits off.  If it gets going, the Aurora comes and goes, sometimes getting stronger and sometimes fading away again to nothing. 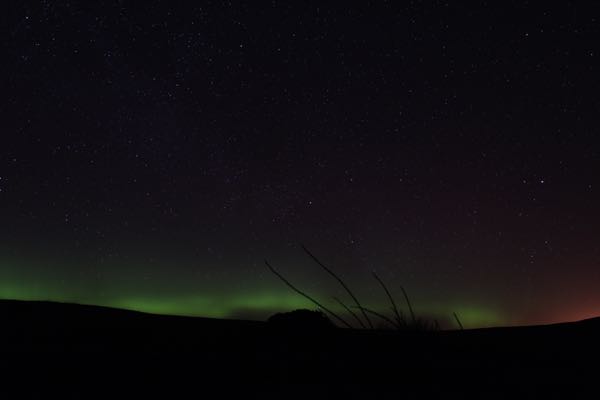 There is no spectacular sound track by Wagner.  There are no swooshes and crackles like Walt Disney would have you imagine.

Just silence and an eerie light that changes in shape and sometimes colour in a way that can make you wonder if it really moving at all.

The same photo fiddled about with again.

Personally, I prefer the truth.  For me, it is special and more remarkable than the frou-frou versions that frequent the media.

On the other hand, of course, I could be completely in error and be watching the wrong part of the sky or just have my camera set up badly.  Who knows.

(I will admit, however, that last night was good but not spectacular – I have seen far better).